The color actually measure for lack of it 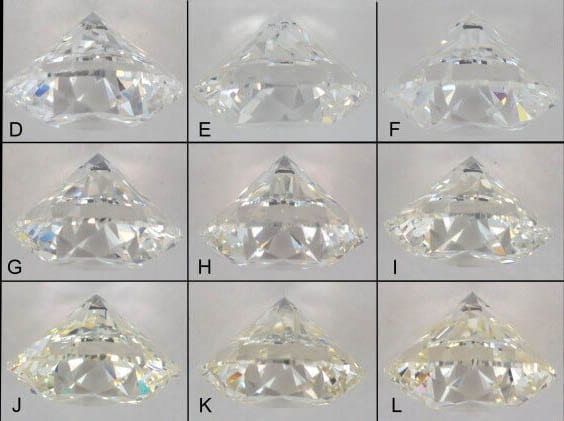 The Gemological Institute of America (or GIA) grades color on a scale of ‘D’ (the absence of color or the whitest diamond) to ‘Z’ (a yellow or brown color). As you compare two diamonds, the most noticeable color difference is typically visible when the diamonds are two grades apart (for instance comparing D to F).

To avoid a pale yellow color, choose a diamond grade H or higher.

Colorless diamonds are listed in the Colorless range. If a diamond falls into one of this color grading, they are the considered to be the most rare and valuable. ‘D’ and ‘E’ colored diamonds will display no color whereas ‘F’ color diamonds will display the slightest hint of color (yellow or grey) when graded face up.

Near Colorless diamonds  will display a slight amount of color as they are graded face up. Most of the color of these diamonds becomes hard to detect as they are mounted in a setting which makes them a very popular choice among most jewelry stores.

Faint Yellow diamonds will show a little more color than the near colorless diamonds, but still have a fair amount of white within the diamond in a face up position.

Very Light Yellow diamonds will exhibit a yellow that becomes very noticeable to the viewer.

Light Yellow diamonds carry a much higher amount of yellow within the diamond and typically have less demand than the other color classifications.

WHY DOES THE GIA COLOR GRADING SYSTEM START AT D?

The GIA universalized color scale has been uniformed for many years. Many grading scales have been used in grading a diamond’s color – an A-B-C scale, an Arabic Scale using 1-2-3, and a Roman scale using roman numerals.

To avoid confusion, GIA chose to start their scale with ‘D’ in order to disassociate from grading scales used in the past. This scale is universally accepted all over the world.

Are There different scales other than GIA? What about after ‘Z’ color scale?

As you access a diamond’s color, separate from the grading, the color scale is divided into five categories from Colorless, Near Colorless, Faint Yellow, Very Light Yellow, and Light Yellow. As you pass the ‘Z’ color grading, diamonds begin a ‘Fancy’ grading scale which includes many different colors.