Diamond jewelry on the silver screen has the ability to change the styles that we wear in our daily lives. With designers paying more attention to the public response to jewelry seen on-screen, more jewelry manufacturers are taking movie fan’s opinions into account as they design pieces for retail.

In appreciation of movies launching a thousand daydreams about that particular piece of jewelry, we thought we would take a look at some of the most memorable and beautiful diamond jewelry to grace popular cinema. They’ve inspired thousands of women to express themselves through their diamond jewelry and given us the ability to lose ourselves in a little bit of fantasy.

When Carrie Bradshaw and Mr. Big finally got engaged, producers knew that the ring chosen would have an impact in the fashion world. In order to stay true to the characters and their story, a classically styled ring with a very unique diamond was chosen. Mr. Big gave Carrie a 5 carat black diamond solitaire slightly offset on a band that was accented in pave set diamonds. The ring created an instant buzz on social media and jewelry designers rushed to issue their versions to match the demand.
With the increase in demand for black diamonds, they began to find their way into earrings, bracelets and other jewelry.

The appreciation for black diamond jewelry increased when celebrities began to wear them on the red carpet in 2010. These diamonds may be more rare than more traditional clear or most colored diamonds due to only originating from two places in the world.
As a bonus treat to diamond lovers, the most famous black diamond in existence is a whopping 67 carat stone name the Eye of Brahma that is set into a brooch surrounded by 100 white diamonds. Felicity Huffman, of the T.V. show Desperate Housewives, wore the diamond to the Oscars in 2006.

This one seems to be left out of most lists, but deserves an appreciation post. Satine, played by Nicole Kidman, wears an ornate necklace that consists of 1,308 diamonds weighing in at an estimated 134 carats. It was designed by Stefano Canturi to rest high on the neck with a larger center diamond and drape gracefully down the chest.

It’s difficult to remember what the rest of Kidman’s wardrobe consisted of in the scenes that she wears this necklace. There is a scene where it is torn from her neck, but don’t worry—that was merely a replica of the necklace. No diamonds were harmed while filming this production!

Originally scheduled for auction after the movie wrapped with an estimated value of about $3 million dollars, Stefano pulled it from the market before it could be sold and has kept it in his private collection in Antwerp. It’s claimed to be one of the most expensive pieces of jewelry to be created for a movie. 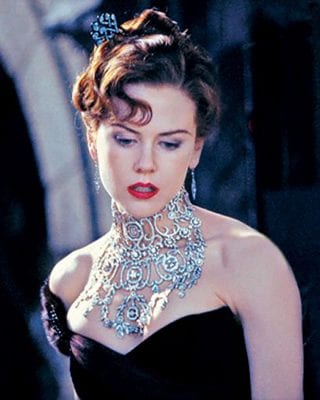 Ocean’s 8 garnered much attention for its female all-star cast, but there is one other aspect that sets it apart from the other films in the series—they are not robbing a bank or casino, they are attempting to steal a diamond necklace. However, this is not an ordinary diamond necklace. In the film, it is named the “Jeanne Toussaint” necklace after Cartier’s prolific creative director but the necklace was actually inspired by a 1931 piece designed for the Maharaja of Nawanagar by Jacques Cartier himself. The original necklace featured many different diamonds of varying colors, weighed in at 500 carats, and was considered to be the dream necklace of a true diamond connoisseur come to life.

Much like we develop personal relationships to diamond jewelry that we own, we develop emotional attachments to the jewelry that we see characters we love on screen. While movie producers, wardrobe designers and actresses understand what a specific style of jewelry can communicate to the audience regarding the character being portrayed, movie viewers and designers love to take inspiration from what they see on film and incorporate it into their own style. Sometimes, with the right combination of public response and movie popularity, we have the special privilege of witnessing an iconic moment in jewelry.