If you were born in January and like deep red stones, then you will no doubt appreciate your birthstone, the Garnet. This beautiful gemstone makes lovely rings, earrings, necklaces and bracelets. No doubt you have seen this stone in fashionable jewelry!

We have a selection of unique Garnet jewelry available in our Etsy Shop!

Did you know that Garnets actually form in a wide variety of colors? It’s true! The most well-known type is the Pyrope Garnet. This stone occurs as a deep purplish red, crimson, or dark red. While the Pyrope remains the most popular, Garnets do naturally occur in a wide variety of hues, including the brilliant orange Mandarin Garnet or the jade-like green Tsavorite Garnet, to name a couple. Garnet gemstones form in every color of the rainbow except blue!

Most often, you’ll see those born in January sporting the deep red Pyrope Garnet. Generally speaking, this stone isn’t as rare as it is beautiful, but Garnet gemstones of more than three carats are unusual, and those of over 10 carats are exceptionally rare! Even those of considerably less than three carats, however, have their uses.

Ranging from 6.5 to 7.5 on the Mohs scale of hardness, Garnets have many applications outside of jewelry. Its abrasive characteristics make it useful in a variety of industries. Small grains work well in sandblasting operations, and Garnet sand can be used to cut metal in water jets. You’ll find Garnets used in water filtration, electronics, and even as a type of sandpaper for finishing wood. The stone is valuable for all of these reasons, but it’s most beautiful use is jewelry. 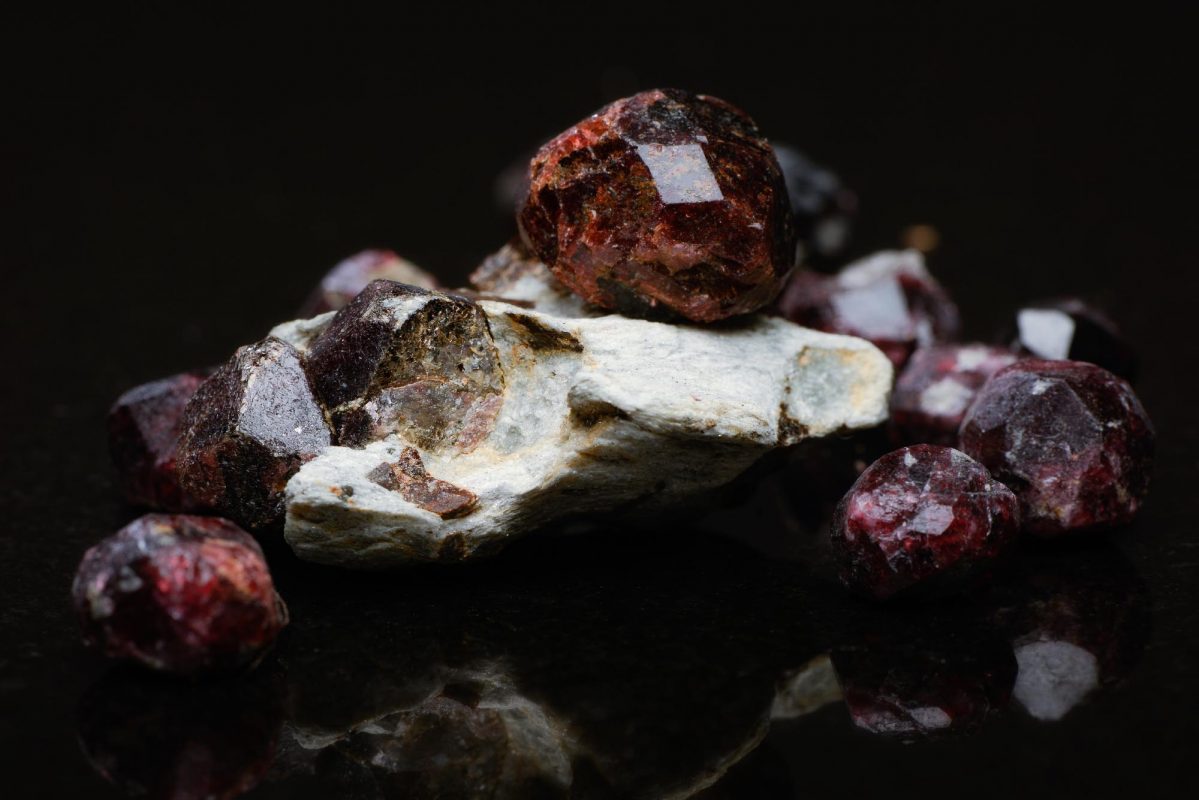 Frequently found in highly metamorphosed rocks and some igneous rocks, Garnets form under the same conditions that create those rock types; high temperatures and pressure. In fact, geologists can use Garnets to figure out what temperature and pressure formed the garnet-bearing rock. Garnets can be found in many places where this kind of stone is located, such as Argentina, South Africa, Myanmar, Scotland, Australia, and even in the US in Arizona.

The Egyptians and Greeks used the stone for jewelry, and Garnets were the most used gemstones in the Late Antique Roman world. The migrations that came after helped to spread the use of Garnet throughout Europe. The gem returned to favor in the 18th and 19th centuries and was considered extremely fashionable in the Victorian Era. Today, Garnet jewelry remains popular.

In legends, Garnet protects travelers from danger while far from home, as well as symbolizes trust and friendship and wards off nightmares. Folklore suggests that Garnet gemstones will grant their wearers strength, protection and healing properties; supposedly it can help improve circulatory health, cure depression, or relieve skin inflammation. Traditionally, friends would exchange Garnets to ensure that they would see one another again.

For those who don’t subscribe to legends or folklore, Garnet jewelry is still beautiful. From earrings and bracelets to pendants, rings, and brooches, January’s birthstone can look fun and chic or elegant and classy. It all depends on the cut, setting and style.

Garnet gemstones are most frequently cut into standard shapes and sizes, allowing jewelers to set them into any number of pieces easily. Any of these cuts look lovely when set in white gold or sterling silver. Encircling the Garnet with white stones can enhance the vibrant color of your Pyrope Garnet.

Many craft jewelers appreciate their clarity and transparency. They also can cut and shape the stone relatively easily, and so they enjoy using Garnets for beads, cabochons and designer cuts.

Caring for your Garnet Jewelry

While Garnets have a relatively high hardness level, stones of equal or higher hardness can scratch your gemstone, so be sure to avoid storing your Garnet jewelry with diamonds or other stones that may damage them. Avoid wearing Garnet when using household cleaning chemicals or when swimming in chlorinated water.

The Garnet gemstone makes for beautiful jewelry with a rich history. Even those on a budget will have no problem finding several lovely pieces within their price range.

You can shop unique vintage Garnet jewelry pieces curated by the Mark’s Diamonds team at our Etsy Shop.