The 2020 award season has given us many memorable jewelry looks on the red carpet, and we’re breaking down our favorites.

The Golden Globes had several moving moments ranging from Awkwafina making a historic win for her role in The Farewell– becoming the first Asian performer to win in a leading role, to Kate McKinnon giving a heartfelt presentation to Ellen DeGeneres for the Carol Burnett Award. The fashion is always more playful at the Golden Globes and this year we got to see some great statement jewelry pieces. This is our list for Golden Globe best jewelry:

Priyanka Chopra and Nick Jonas in Bulgari: Priyanka and Nick showed up both sparkling in Bulgari. Nick wore a Bulgari Octo L’Originale Full Baguette Diamonds to the event which featured more than 1,000 diamonds and is worth almost $1 million. He also wore a Prada bolo tie. Priyanka wore an intricate 56 carat Bulgari diamond collar that paired nicely with her old Hollywood glam waves and pink Cristina Ottaviano gown.

Gillian Anderson in Tiffany & Co.: Gillian stunned in a rare red carpet appearance wearing a white gown by Safiyaa- a label often worn by Meghan Markle- and a stunning Tiffany & Co. diamond circlet necklace, which was draped across her back.

Jennifer Aniston in Cartier: Jennifer wore a sophisticated Dior Haute Couture black gown. To accent this classic look, she wore a Cartier necklace by Fred Leighton from the 1950s which featured 2 rows of diamonds.

Jennifer Lopez in Harry Winston: No stranger to bold fashion, Jennifer wore a dynamic green, gold, and white gown by Valentino and accented it with over 145 carats of Harry Winston Columbian emeralds and diamonds.

The Grammys were somber this year, as the ceremony took place only hours after the death of Los Angeles Laker’s star Kobe Bryant and others in a helicopter crash. There were many big moments including a sweep by young star Billie Eillish. The real show was the jewelry worn on the Grammy carpet. Below are some of our favorites.

Lizzo in Lorraine Schwartz: Breakout star Lizzo was stunning in a white Atelier Versace gown that was embellished with Swarovski crystals, old Hollywood glam waves, and completed the look with Lorraine Schwartz diamond necklace and earrings.

Billy Porter in a design by Alexis Bittar: The Pose star has been giving us jaw-dropping red carpet looks again and again, and the Grammys were no exception. He stunned us with a blue sequined Baja East outfit by Scott Studenberg that featured a wide-brimmed hat complete with strands of beads that could move to cover his face. For us, the look was completed with a spider bracelet designed by Alexis Bittar.

History was made this year as Parasite became the first non-English language film to take home Best Picture. The Oscars also gave us some great jewelry moments as some very memorable necklaces, bracelets, and earrings hit the red carpet. Here are some of our favorites.

Charlize Theron in Tiffany & Co.: Charlize wore a Tiffany & Co. drop necklace that featured over 165 diamonds. The marquise center diamond was over 21 carats. She wore a custom-made Dior gown.

Gal Gadot in Tiffany & Co.: Gal is always stunning on the red carpet, and this Oscar season she sparkled in a Tiffany & Co., ‘Clara Necklace’ that had an oval center diamond coming in at over 11 carats. Her gown was Givenchy Haute Couture.

Zazie Beetz in Bulgari: Zazie is the essence of cool and chic, and turned heads by pairing two Bulgari necklaces from their High Collection- She wore the “Diva’s Dream” white gold necklace with more than 78 carats of diamonds, which was topped with a choker made with emeralds and diamonds, totaling over 19 carats. The featured center emerald was a 5.49 carat oval.

Regina King in Harry Winston: Regina rocked the carpet in $500,000 worth of Harry Winston jewelry. The pieces included 3 rings and a bracelet, paired with a pink Versace gown.

Timothèe Chalamet in Cartier: Chalamet wore a sustainable Prada windbreaker and trousers- which seemed a bit casual for the Oscars, but he paired his look with a vintage Cartier brooch from 1955, which featured 117 diamonds.

Cynthia Erivo in Piaget: Cynthia stunned with a collection of rings worn on every finger. On her hands were Piaget diamond rings including the Piaget Rose ring, Piaget Possession Ring and the Piaget Golden Oasis Mirage Ring. She showed off more than 750 total diamonds with this array of rings. 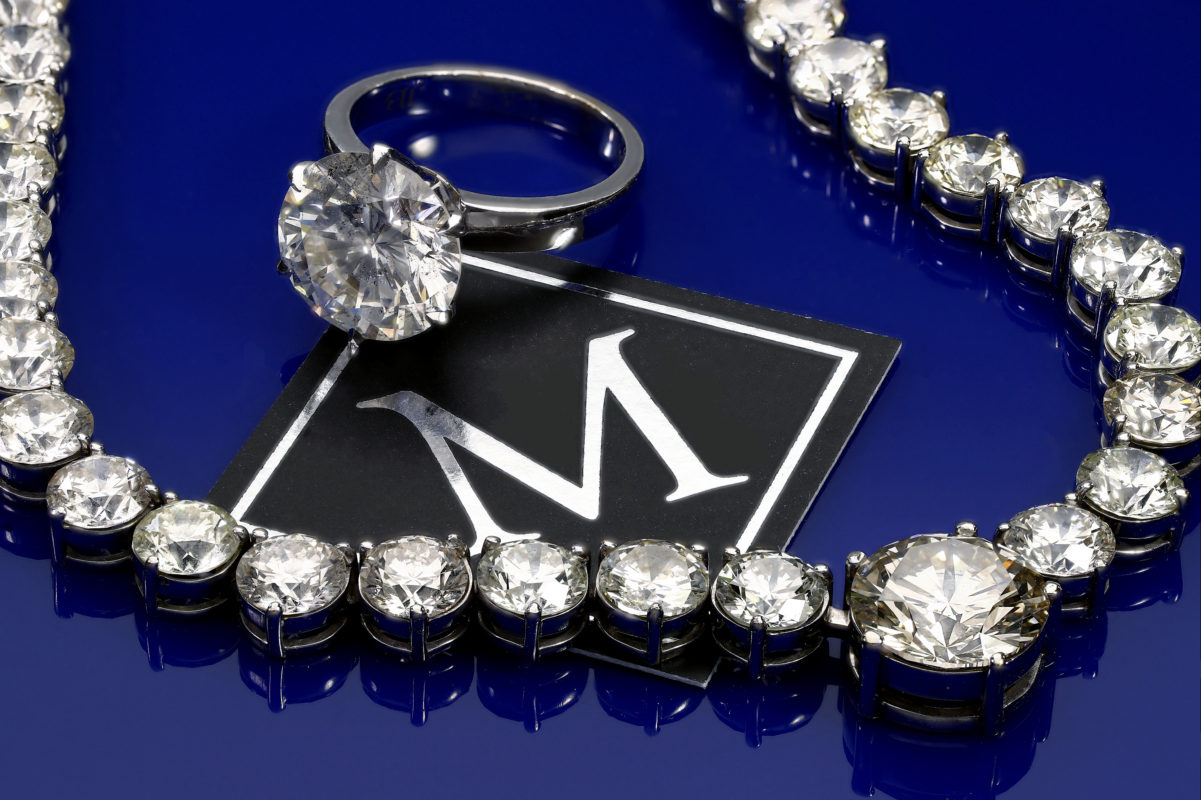 Did you know that here at Mark’s Diamonds we have the ability to create high jewelry pieces, just like your favorites at the award shows? Book your appointment with Mark to start designing a red carpet ready fashion jewelry look today.