The name Rolex has become synonymous with style, precision and class. Long considered the best name in watches, the brand continues to be innovative yet classic well into the 21st century. Discerning consumers know, when purchasing a timepiece, few brands can compare to the elegance and status that a Rolex provides. In order to understand how Rolex became the most revered name in wrist timepieces, we have to go back to 1905, the beginning of the timepiece revolution. At the turn of the century, wristwatches were in their infancy. Standard watches were bulky pocketwatch affairs, and while a few wristwatches were in circulation or development, they were widely disregarded as inaccurate. They were also large, similar in size to a pocketwatch, due to the available size of the mechanics. They looked clumsy and cumbersome on the wrist. Due to this, most preferred to continue using pocket watches.

Enter Hans Wilsdorf, a young entrepreneur. In 1905, he had a vision of creating a watch that could be worn on the wrist, keeping accurate time while appearing elegant and refined. His vision became his obsession, and he dedicated his career to the creation his watch, spanning continents to find the most precise movements and inventing what he couldn’t find. He commissioned smaller movements from a watchmaking factory in Switzerland, and began the work of creating chronometric precision. His watch was realized, and the name he gave his invention was Rolex. From the first models released, the excellence of his watches was recognized with awards and public accolades. In 1910, just five short years, Rolex was the first watch in the world to receive a prestigious Swiss Certificate of Chronometric Precision. Four years following that award, Rolex was awarded a class ‘A’ precision certificate from the Kew Observatory in Great Britain, which had only been awarded to maritime chronometers. Hans Wilsdorf had succeeded in what was considered impossible and changed the world of watches with Rolex. 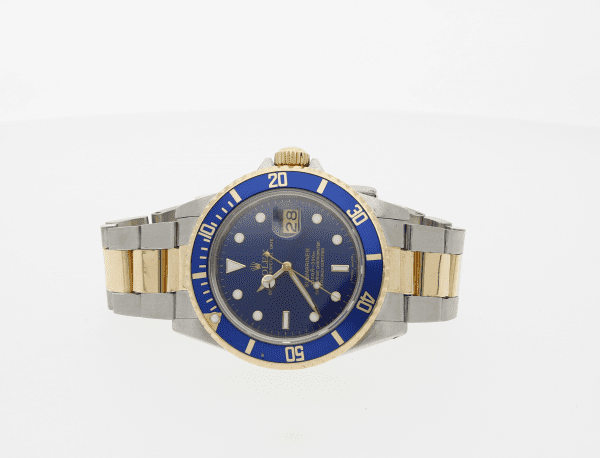 With a successful invention, Hans moved his watchmaking factory to Geneva, considered the watchmaking capital of the world. He opened the first Rolex factory in 1920, and for the following 98 years, the brand has continued to lead the watchmaking industry with innovation and unsurpassed quality. In 1926 Rolex again changed the watch market with the world’s first waterproof watch, the Rolex Oyster. Mercedes Gleitze, a swimmer from England, wore the model during a historic ten-hour swim across the English Channel in 1927. The watch was impervious to the water and became the standard for other watches to attempt to emulate.

Rolex continued to pursue groundbreaking watches with the introduction of a perpetual movement in 1931, the world’s first self-winding watch. The movement was designed to wind itself as the wearer went through daily activities and was an instant success. Consumers loved the idea of less work to keep accurate time, and the movement became the basis for any automatic watch in the market to this day. Rolex elaborated on this improvement by inserting the first date calendar into the dial window in 1945.

Rolex began to enjoy many famous clients and inclusion in historic expeditions, helping establish its reputation as being the preferred watch of explorers and celebrities alike. The first team to fly over Everest, pilots, swimmers, divers, and sports car drivers all wore Rolex watches. One of the earliest endorsers was Sir Malcolm Campbell, a racecar driver who broke the world record in speed nine times and was very vocal about his preference for Rolex. Sir John Hunt chose a Rolex for his Everest expedition, prompting the release of the Rolex Explorer model in 1953. Also, in 1953, Rolex released the Submariner model, waterproof to a previously unreached 100-meter depth. Two years later, in 1955, Rolex released the GMT-Master model, designed to aid pilots who were just beginning to explore international travel. In 1956, Rolex released the Day-Date watch. One of the most popular models available, it was the first perpetual watch to both spell the day of the week and display the date on the dial. The watch was originally only produced in 18K gold or platinum and a President bracelet was custom designed for the dial. 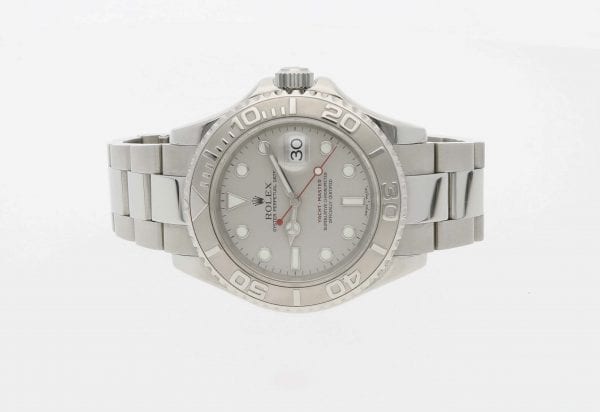 1956 also saw the release of the groundbreaking Oyster Perpetual Milgauss model, designed to withstand magnetic fields experienced by scientists in their field of study that previously had inhibited the use of watches. Rolex showed appreciation for women in 1957 with the release of the Lady-Datejust, the first ladies version of the Rolex date chronometer, designed with smaller dials and bracelets in order to suit women’s hands. In 1960 Rolex made history once again by providing Lieutenant Don Walsh and Jacques Piccard the Deep Sea Special model on their experimental descent into the Marianas Trench. This helped establish the future partnership between Rolex and COMEX, who supplied their divers with Rolex watches to wear during exploration. In 1963 Rolex released the Cosmograph Daytona, a watch specifically equipped with a tachymetric scale on the bezel for calculating average speed for use by race car drivers and racing fans.

Through the nearly hundred years of inventions and new models, Rolex has never compromised on the quality, durability and elegance of their watches. The brand has developed icon status with loyal wearers among all walks of life including Winston Churchill, Steve McQueen, Dr. Martin Luther King, Elvis Presley, John F. Kennedy, Brad Pitt, Orlando Bloom, David Beckham, LeBron James, Jay-Z , John Mayer, Adam Levine, Ellen Degeneres, and many more. Rolex has become a rare brand that surpasses styles and has a broad appeal to anyone who seeks timeless quality. 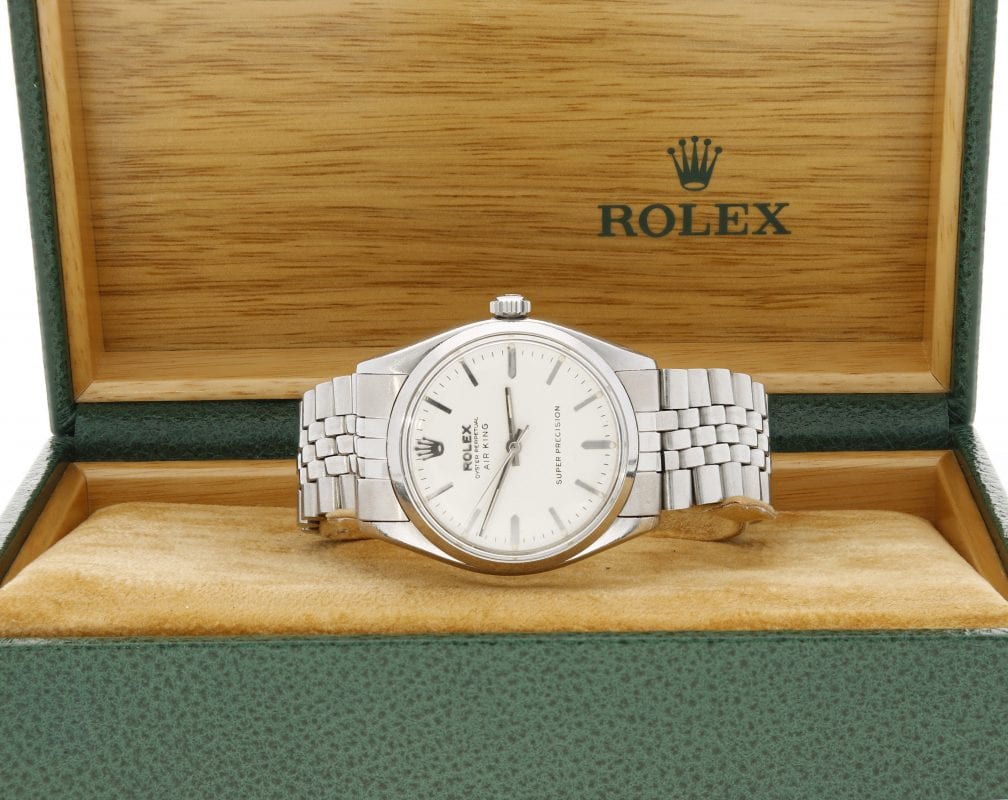 Rolex watches are often expensive and new models are only available via authorized retailers. Many consumers have felt that the timeless luxury afforded by owning a Rolex was out of reach, especially when Rolex prohibits authorized dealers from applying any sales or discounts on their merchandise. If you shop for a new Rolex, you must be prepared to purchase a watch at full retail value plus sales tax. While a genuine Rolex is worth every cent of the retail price asked, there are options for those who desire the quality of a Rolex without paying retail. For others, purchasing a pre-owned Rolex allows the opportunity to own a specific model that may not be in production. If a buyer is interested in a more historic model of the luxury brand or is purchasing the watch as a gift to commemorate an event in a loved one’s life, a pre-owned Rolex may be the only avenue of locating the model they seek. For example, if you wish to purchase a watch for someone who has graduated flight school, locating an original GMT-Master model would be impossible without shopping pre-owned Rolex dealers. 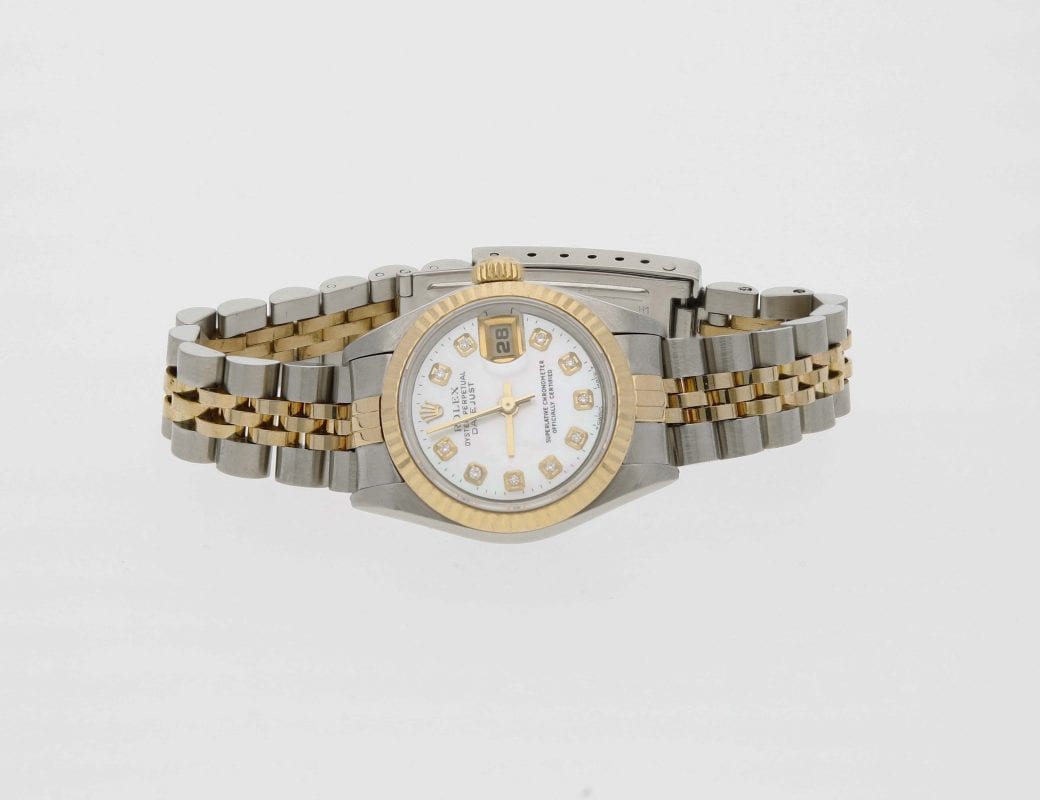 Because it’s a Rolex, you can be certain that the pre-owned watch would carry all the quality craftsmanship and reliability that the brand has become famous for and still benefit from the added charm and value of the historical significance of the model. Most Rolex models are virtually indiscernible from the previous releases, as the brand has made an effort to continue styles with only minor updates, so purchasing a pre-owned Rolex won’t entail a compromise in visual aesthetic. While a pre-owned Rolex can be found at a fraction of the original retail price, Rolex does retain a high percentage of the original value due to its iconic status in watches and the price difference often reflects the same depreciation one would experience in purchasing a new vs. used car. This, combined with the craftsmanship that enables pre-owned Rolex to function and look as good as a new Rolex, helps to ensure the value of investment in a pre-owned Rolex watch. In fact, some of the models no longer in production have become so sought after that the resale value exceeds the original retail value. When you purchase a pre-owned Rolex, you are choosing to purchase a timepiece that is in limited circulation. Many consumers choose this option as a means of obtaining a Rolex that carries a higher degree of significance as a limited availability luxury watch.

If you’re in the market for a prestigious watch, Rolex deserves the top place on your list of potential brands to shop. No other brand has exhibited the longstanding allure, quality, innovation and high social status.